—「0X://Explanation」
Honestly this is going to be quite a read, i went through alot getting this board to work. but it was all worth it for the miku-bombed keyboard of a lifetime. (that i will definitely use yes i still use non split keyboards...) pls mind any typos: i typed this on the finished board - which is weird coming from a present dactyl-manuform user. 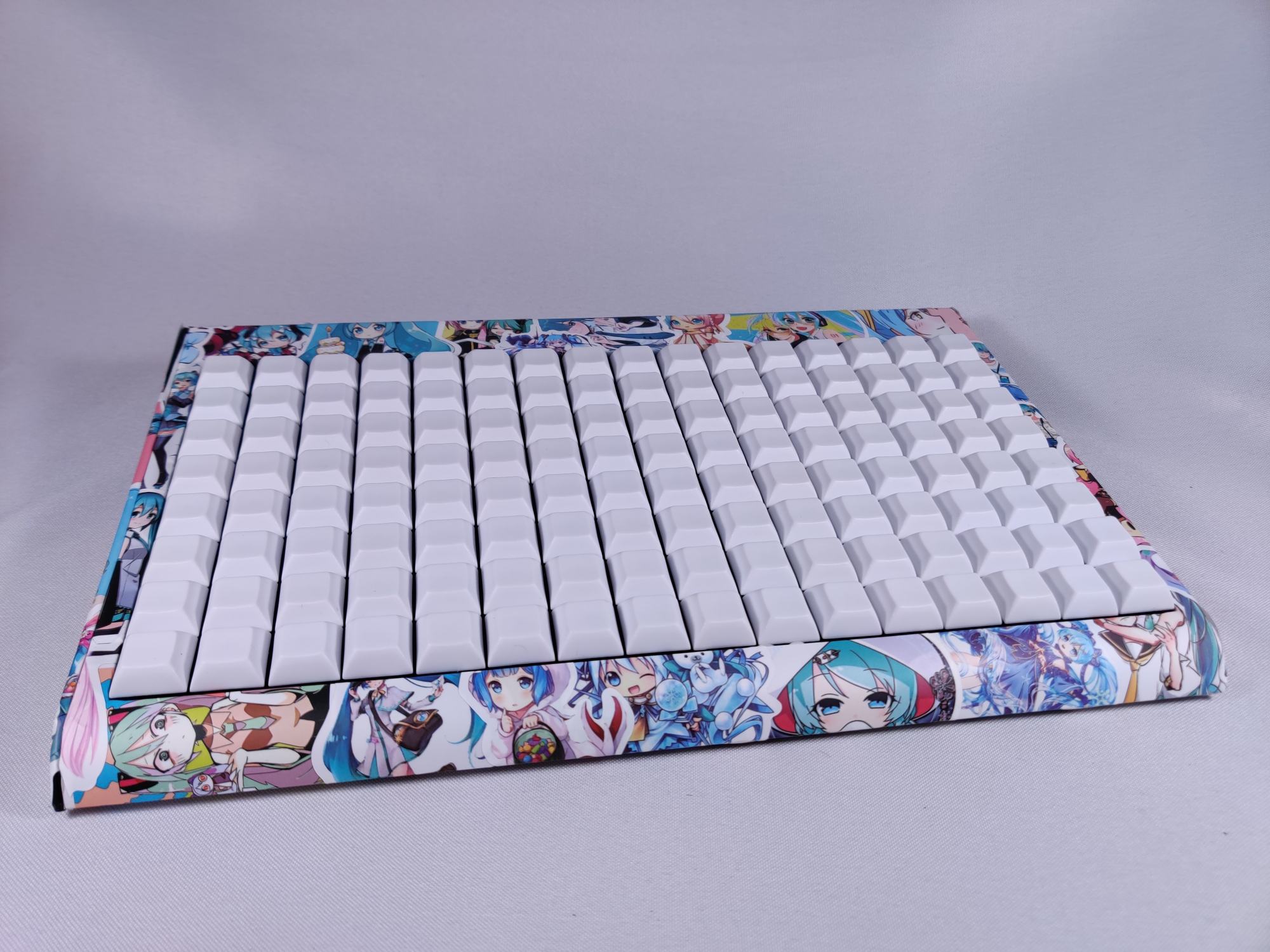 Our story begins about 6 months ago, i was but a humble dweller of the r/mechanicalkeyboards subreddit and i had already dipped my toes in quite a bit. i had my fair collection of unique boards (at least i thought) with my compaq mx11800, keeblade, gergo, fc980C, and the like. though my collection was growing and getting more unique, i hadn't yet acquired my "endgame" (though i now know thats impossible).ortho linear boards were a must for me now, but i was also in love with vintage cherry boards and always kept my eyes peeled for them. i then saw a very particular post..

u/piercejenkins posted this which really grabbed my attention. luckily i was quite early to the post and was able to snag one off the seller here (later comments show that they sold out quickly). the cherry rc128bm was an incredible steal for under $50 and i followed up with a a post thanking u/piercejenkins and showing off my sa miami night set that clearly didn't fit. you would hope this is where the story ends, i have my keyboard and unmatching caps and i am able to type with it easily, but in fact, this is only where it begins.

Unfortunately for the rc128bm, i was not initially passionate about getting it to work. my main pc does not have ps2 ports, neither does my secondary or turshiary. luckily for me i've got around 4 pcs i received from my school and others from various street corners that were ready to do the job! Except it wasn't that simple. my own ineptitude and passion for other projects (you could call it that or you could call it laziness) led to me giving up on it for the time being. I didn't currently have any pcs with a 32bit os (which in the comments of the original post i learned was necessary), so i told myself i would pick up on it later. though *later* may have turned out to be longer than i initially planned...

Fast forward nearly to present day. A couple weeks ago i decided it was about time i figured out how to program this board. I had just set up a 32bit windows system and was cautiously hopeful that the disc included with my purchase. Oh my naivety. I put in the disk.... and VIOLA~ cherry software:

yes yes yes! this looks good indeed, now i just need to- oh it wont upload the changed settings... hmmmmm. i had nearly given up, as i just couldn't seem to find what i needed. but alas i stumbled across a super helpful comment. u/InfernalRodent posted this which lead to a few breakthroughs!
mainly being:

yes yes yes!!! this time surely it will work. i installed the software (which mind you looks really similar to the cherry one, go figure) and selected the Tipro KMX 128. Now i just had to plug it in and- oh. now its not recognizing the keyboard,,, maybe its just the computer, let me try another one- oh...

well it seems i've damaged the board, it wouldn't even be recognized by the cherry software like it was before,,, i guess this is it. my dreams are crushed yet again. im really out of ideas now, or so i thought...

Pt. 4: 4tunately There Was Hope

Fast forward to three days ago. i just started a couple hour 3d print. i glanced at the unfinished dactyl boards, wishfully dreaming about them being finished. (fun fact: im quite lost when it comes to actually making a split, my previous ones i just programed as two seperate keyboards, if anyone has any help pls send it my way thanks) since bashing my head against the split keyboard wall didn't sound fun, i looked around to see if i had any other unfinished handwires. i opened up some of my drawers and saw it. the rc128bm- then it hit me! HANDWIRE☆OVER☆THE☆PCB. genius i know. what could go wrong right? 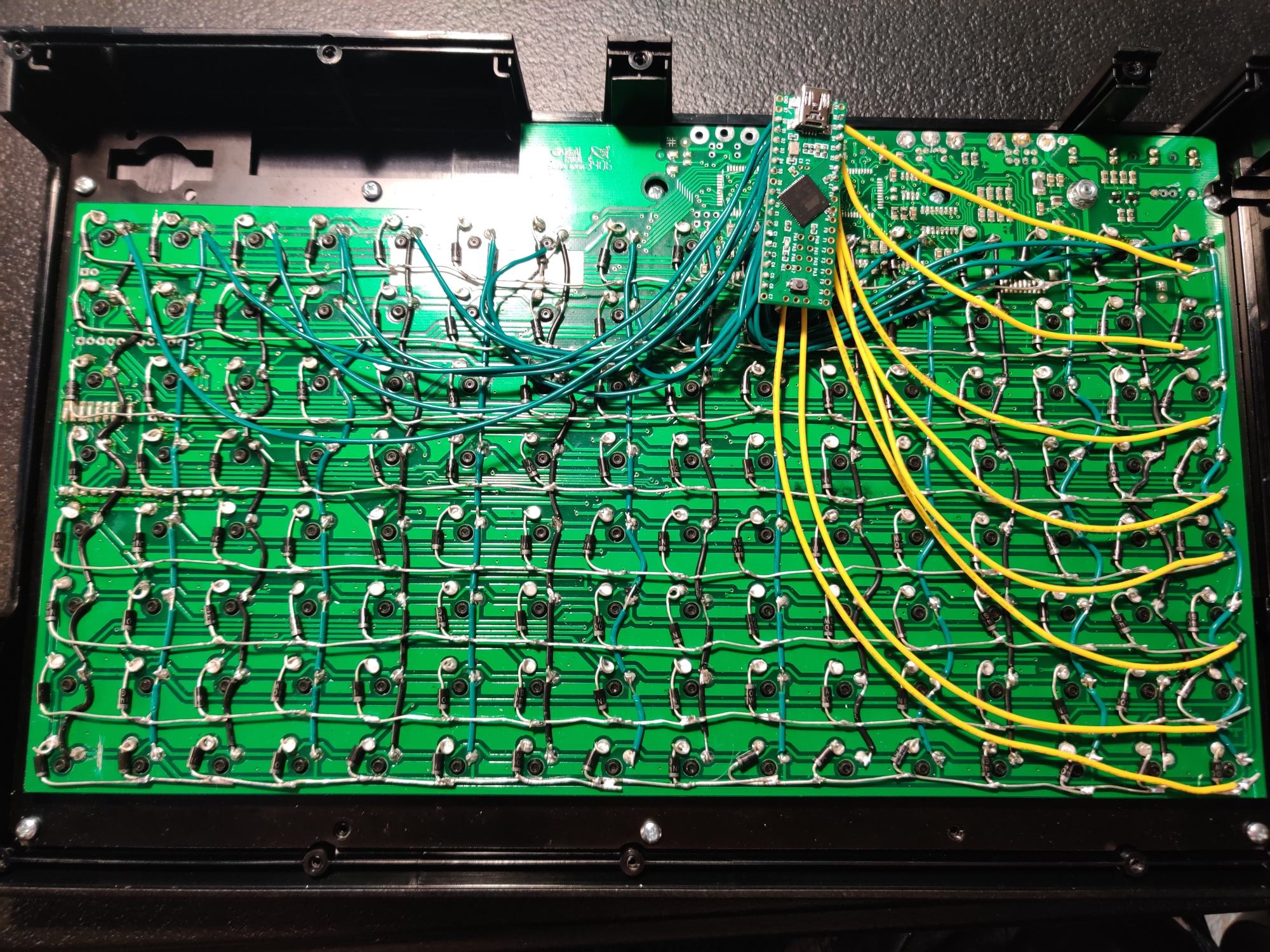 10 hours and one Teensy 2.0++ later. ITS FINALLY DONE! time to program it. i open up kbfirmware.com and make the layout. i flash the board and anxiously prepare to test it.

i open up visual studio code. the blank blinking cursor stares directly into my soul. i feel a bead of sweat trickle down my face. "this is it." i thought and lowered my hand on the first key:
> "acegik"
i froze in shock, surely this isn't the case, i turned my hand and slowly pressed another key:
> "bdfhjl"
it slowly dawned on me how important the pcb truly was and what i had overlooked... in all seriousness though, yeah i had been overly naive and confident and it didn't work out. i'll just throw in the towel here and call it good. i put up an alright fight, but was bested in the end. i threw up a reddit post in shame and called it a night.

To my suprise, the post i made got comments of people encouraging me to destroy the pcb instead. The general consensus was to take a drill to the board, so i did that very thing. Let's just say enough hours passed for me to watch an entire season of a show, but alas i finished. 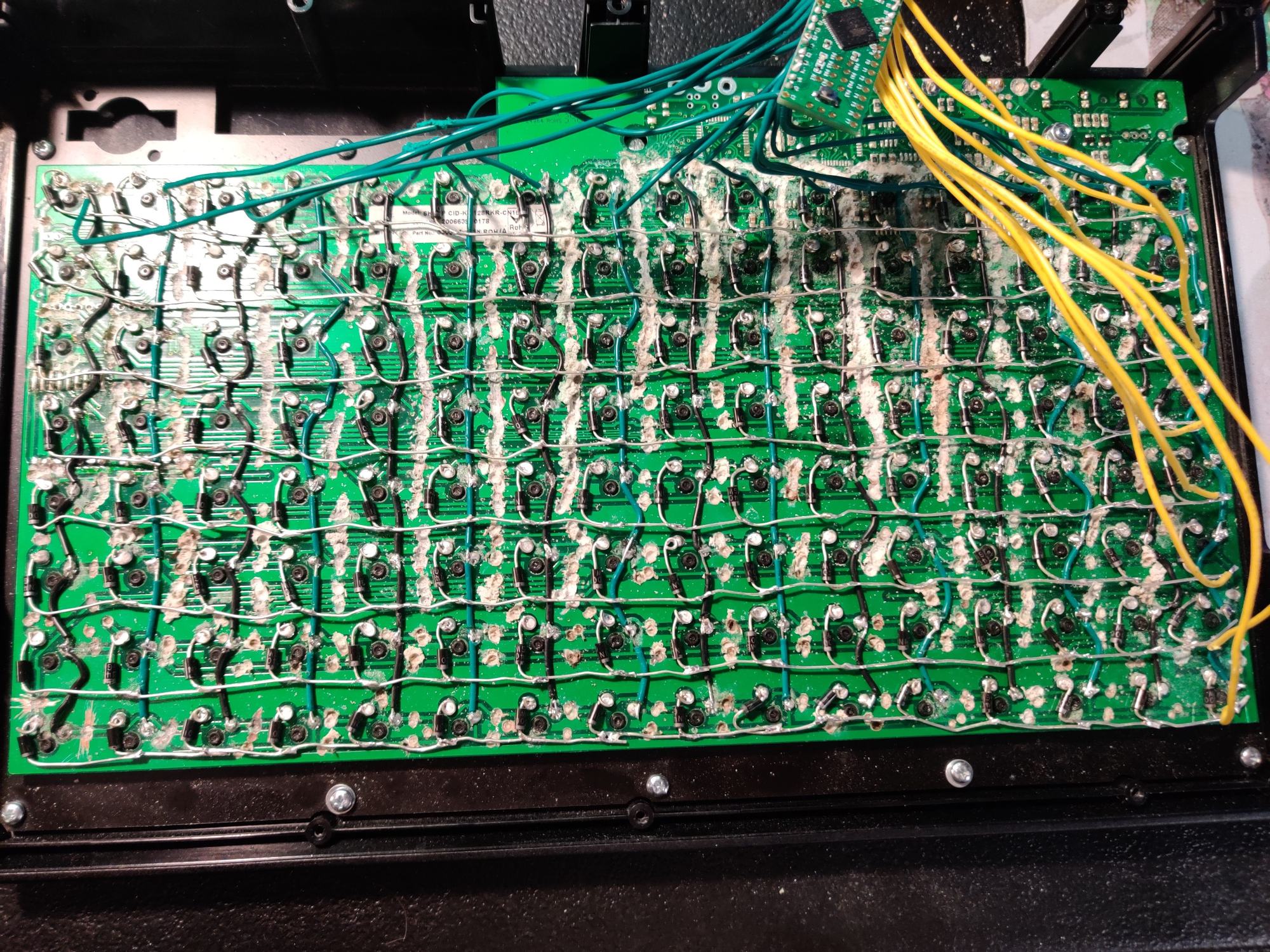 After testing it, i logged all the not working keys and did some repairs.

and it was finally FINALLY all working! It had all come together, and i could reassemble it.

I was ecstatic that it was working, but i couldn't just put it back together all plain like. i did some looking at other keyboards and was inspired by u/madsnackz's filco. i opened my sticker bag and looked at what i had. ah yes, hatsune miku, perfect. at this point i had a great time wasting an hour putting stickers on this board. 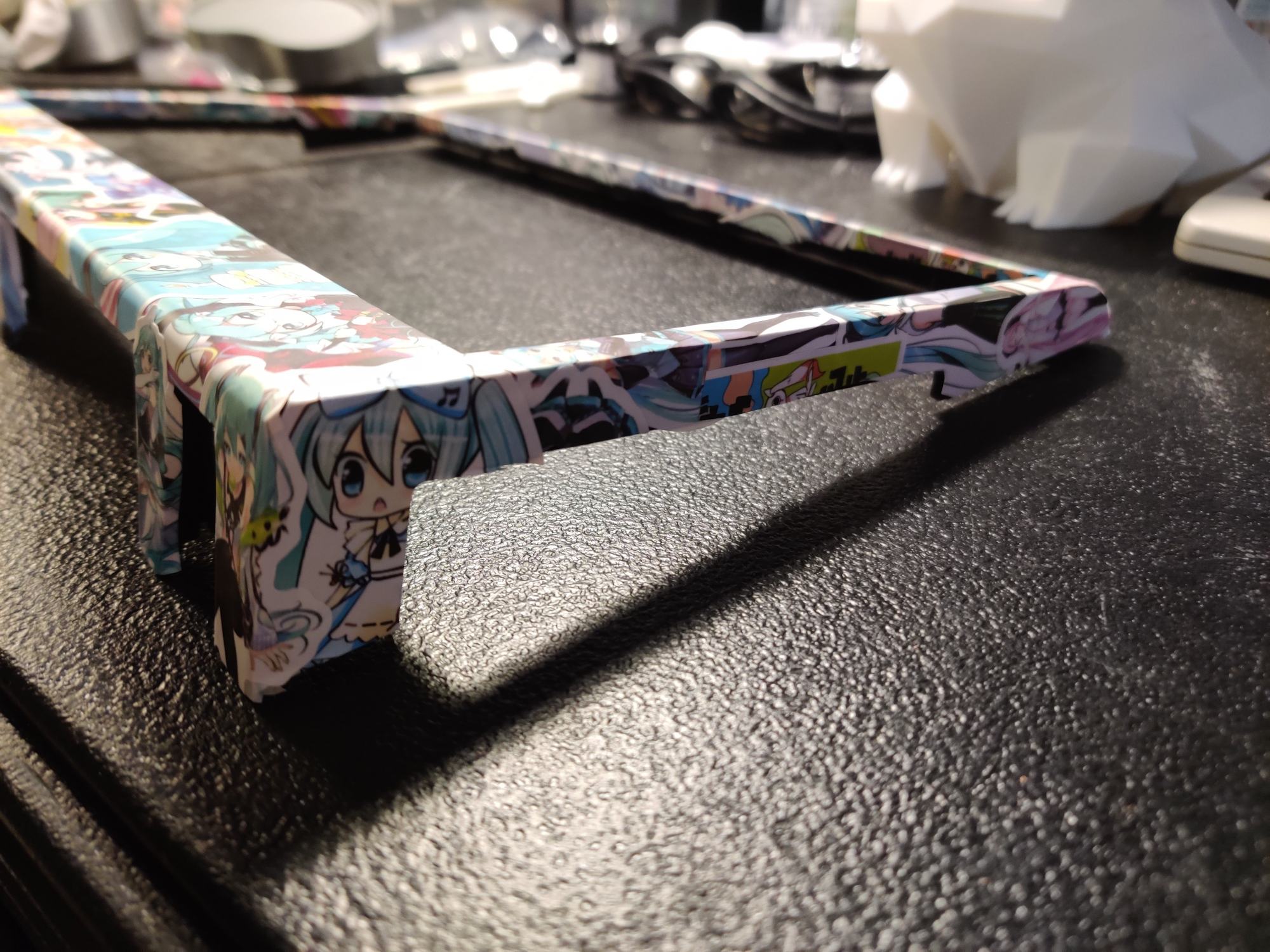 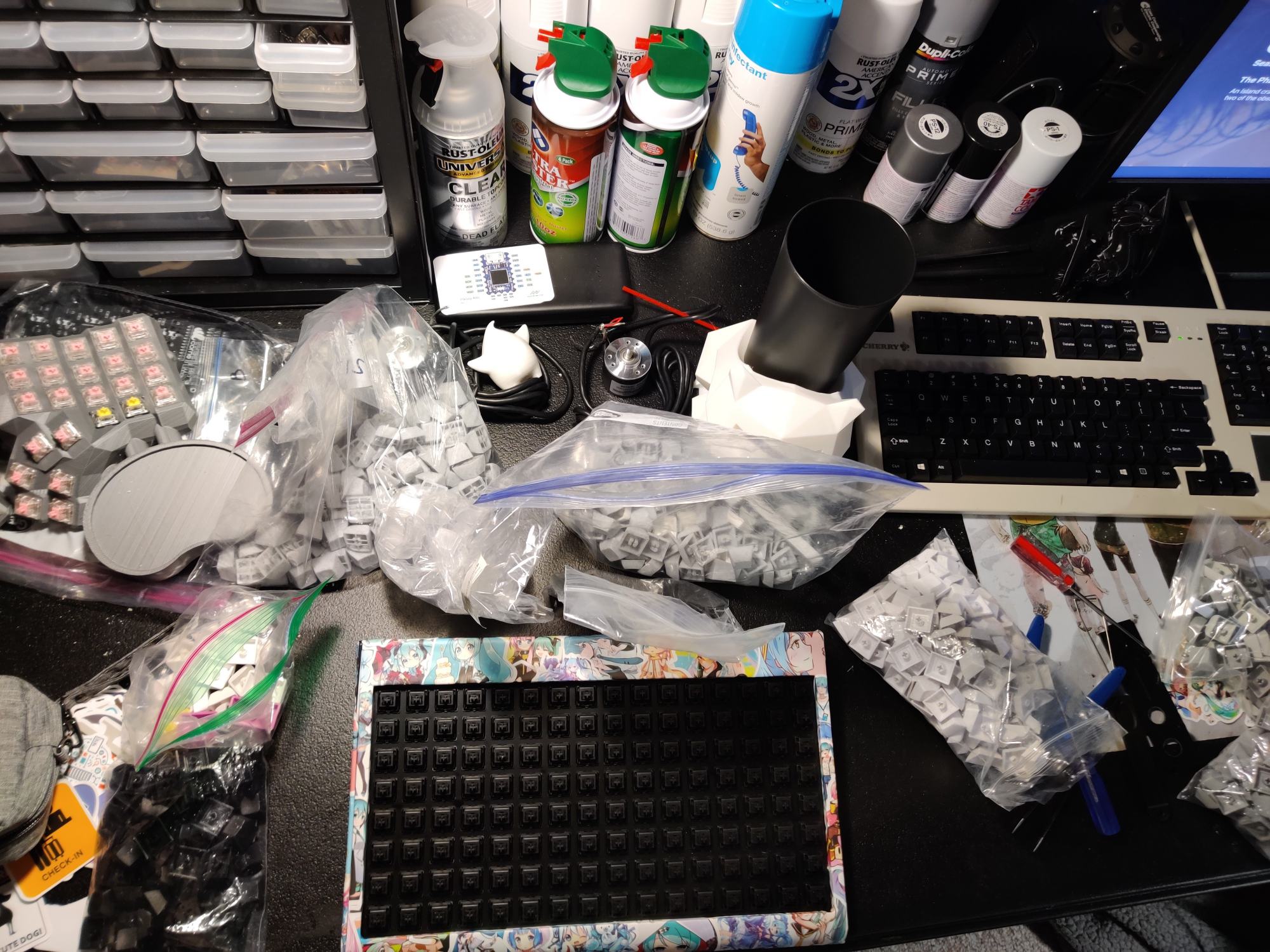 It was quite the journey but it was finally done! i didn't think i would've not only finished it, but also improved it.
improvements made:

i'm very happy to have this board, even though it wont be my main, i'll try and put it to good use. that or it'll become a big macro board for my main setup. Thanks for following my lengthy journey. Yours truly will now take his leave. Enjoy some poorly taken pics: 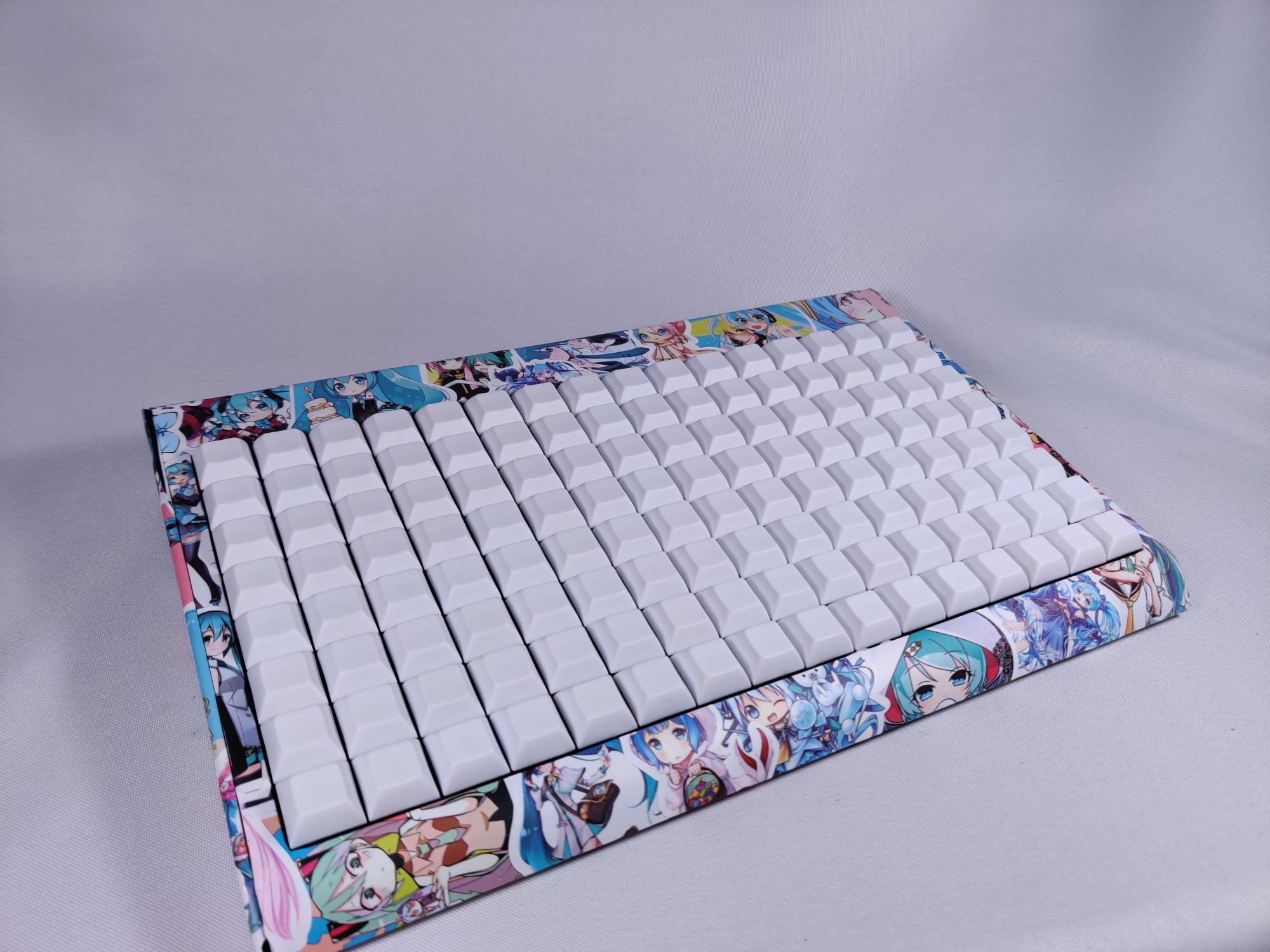 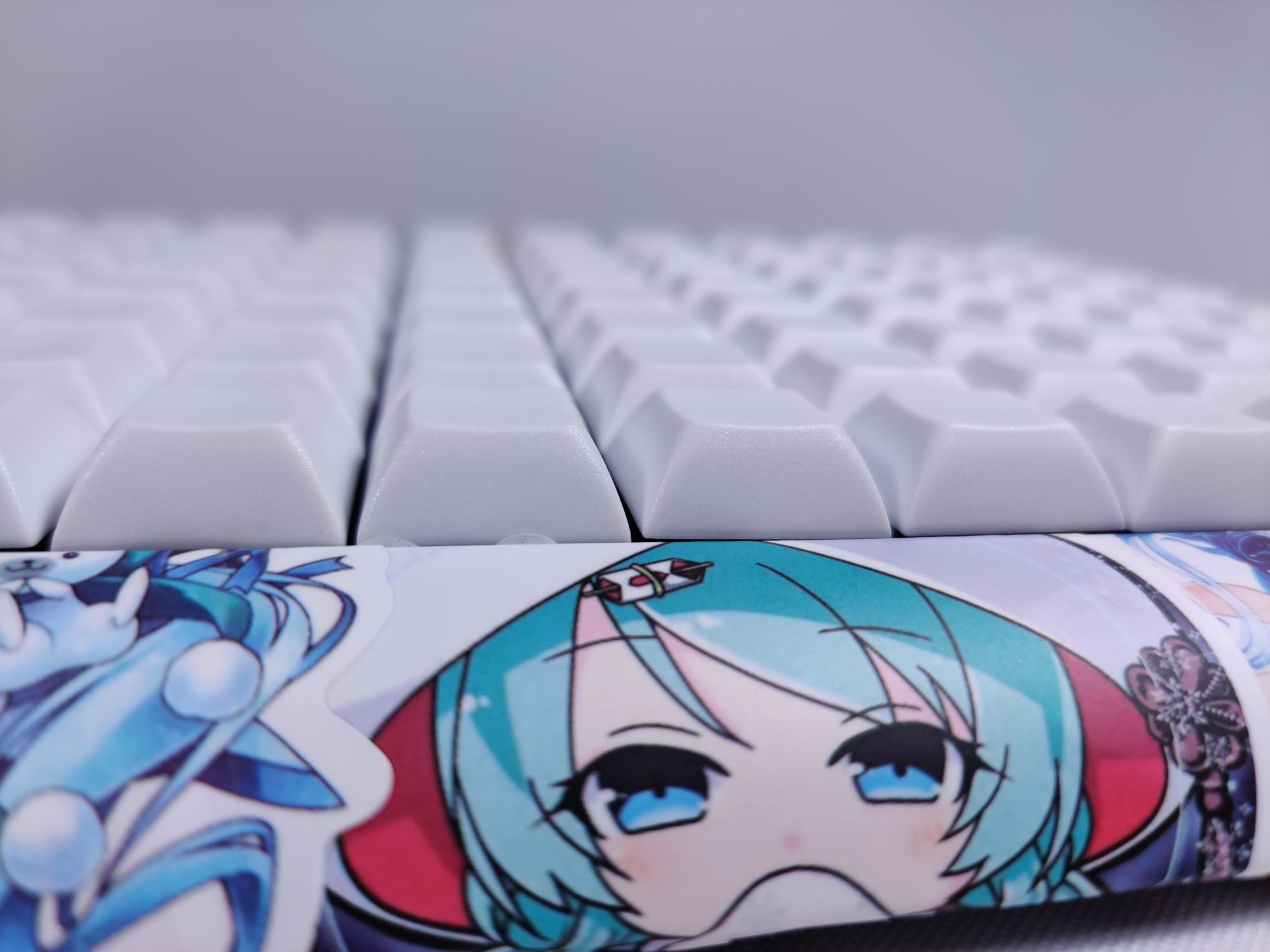